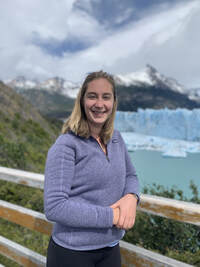 Caitlin Stockwell
MSc Candidate (co-adviced with Jon Grant)
cstockwell@dal.ca | ResearchGate
Funding: Ocean Frontier Institute
​
​Caitlin earned her BSc in Marine Science with a minor in Environmental Humanities from the University of Delaware. While at UD she started working with Dr. Doug Miller on using UAVs to map habitats along the southern Delaware coast focusing on Sabellaria vulgaris reefs and presented her research. After she graduated, she stayed for a gap year working on miscellaneous projects in the Trembanis/Miller lab ranging from coastal dune and coastal salt marsh mapping with UAVs to helping deploy AUVs to map potential off-shore windfarm sites. Currently, Caitlin’s MSc research is focusing on the effects of oxygen supplementation on cultured salmon using real time acoustic telemetry. This work will allow for an early warning indicator of fish health and can help to improve farm management. 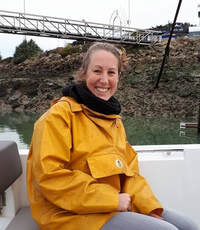 ​Stephanie earned her PhD in Physical Geography (satellite remote sensing of phytoplankton phenology) from the University of Leicester (UK), while stationed as a Marie Skłodowska-Curie fellow at the Balaton Limnological Institute, Hungary. In her current research, Stephanie is building upon this and subsequent postdoctoral experience at the Université de Nantes (France), using time series satellite remote sensing in application to bivalve aquaculture. She will be testing satellite image-derived maps of cholorophyll-a, suspended sediment, and sea surface temperature and using these to provide insight into questions of mussel and oyster aquaculture site selection and carrying capacity in PEI bays. 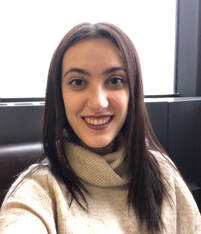 Shannon Wood
MMM 2020
shannon.e.wood@dal.ca
​
Shannon earned her BSc in Biology and Environment, Sustainability and Society at Dalhousie University. Throughout her undergraduate degree, Shannon was particularly interested in the role of science communication in decision-making processes. As a Master of Marine Management candidate, Shannon is investigating public perceptions of marine technology and practices. Her research explores the drivers of social acceptability of shellfish aquaculture in Atlantic Canada. Her research aims to identify opportunities for improved management of the industry to address public concerns about shellfish aquaculture, and to identify factors informing the social acceptability required to operate in the industry. 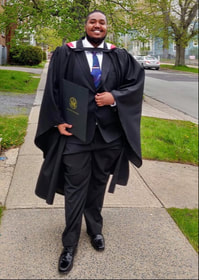 Omar Sickander
MMM 2020
osickander@dal.ca
​
Omar recently completed his BSc Co-op, Major in Marine Biology and a Minor in Business with a Certificate in Aquaculture and the Environment at Dalhousie University. He has maintained a strong interest in aquaculture since his time working for the Aquaculture Association of Nova Scotia on one of his co-op placements. As a Master of Marine Management candidate, Omar is investigating IMTA efficiency and perceptions about its potential for implementation. 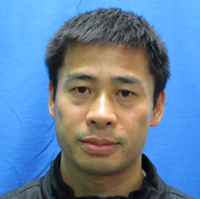 Donghui Jiang
Postdoctoral Scholar (co-adviced with Jon Grant and Crawford Revie)
pomsediment@gmail.com
Funding: NSERC-CRD
​
Dr. Jiang is developing ocean circulation models using FVCOM to simulate the spread and outcome of pathogens in the coastal embayments of Atlantic Canada. The models will be used as a tool to evaluate disease transmission and optimize strategies to reduce that risk.

Romain's research focuses on the physiological response of marine organisms to environmental variability. He uses  the Dynamic Energy Budget theory, a bioenergetic modeling approach to simulate and predict how fish, shellfish or algae react to environmental pressures like temperature, food availability, oxygen, salinity. His current project aims at quantifying the impact of the harmful microalgae Alexandrium tamarense on the physiological rates (filtration, respiration, growth) of mussels and scallops and the potential effects on aquaculture production in Eastern Canada. 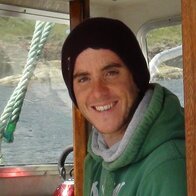 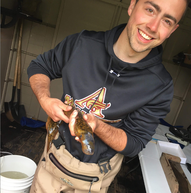 Justin Trueman
MMM 2019  (co-adviced with Lucia Fanning)
jdtrueman@dal.ca
Funding: Ocean Frontier Institute
​
Justin completed his honours degree in Biology at Mount Allison University working on fish behaviour and physiology. After completing this work, as well as wild Atlantic salmon monitoring efforts with a first nations organization, an interdisciplinary approach to research became appealing. Justin is a current Master of Marine Management candidate investigating the role that transparency has on the social licensing of the aquaculture industry in Norway and in Atlantic Canada. By drawing from the Norwegian perspectives of transparency and their successful and continued expansion of the industry, managers in Atlantic Canada could have a better understanding of how to progress towards an aquaculture industry that achieves social license. 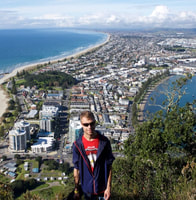 Paul Kraly
MMM 2019 (co-adviced with Jenny Weitzman)
Paul.Kraly@dal.ca
Funding: Ocean Frontier Institute
​
​Paul completed a Master of Marine Science degree at the University of Gothenburg, Sweden, in 2018 where he focused on aquaculture and fisheries management looking at sustainable alternatives to pesticide use to help rid farmed salmon of the sea lice Lepeophtheirus salmonis. Paul has since become interested in the interdisciplinary aspect of aquaculture and is now a Master of Marine Management candidate. He will be investigating how historical factors have influenced the development and social acceptability of finfish aquaculture across Atlantic Canada. This work can help inform decision-makers towards a sustainable and socially accepted aquaculture industry in Atlantic Canada. 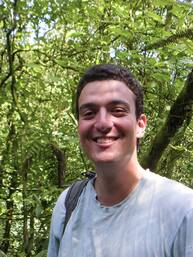 Renato Pavone
MITACS Intern 2019
rebpavone@gmail.com​
Funding: MITACS
​
Renato is about to graduate in Oceanography at the University of São Paulo, in Brazil. As a Mitacs intern, he is going to participate in a research project that aims to assess the impacts of rising water temperatures and air exposure (environmental mortality and fishing-induced mortality, respectively) on scallops. This research will help improve understanding of the physiological responses of scallops to specific temperature regimes, as well as the knowledge of the impact of fishery practices (air exposure on deck). 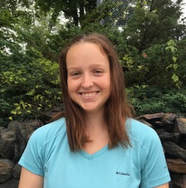 Keryn is in her final year of a BSc in Marine Biology at Dalhousie University. Keryn’s honours research is focused on observing the effect that sediment type and temperature have on the lethal threshold for oysters under anoxic conditions. This research will help better inform oyster farmers on the effects of anoxic waters. 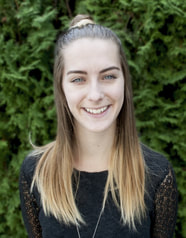 ​Meghan has a BSc in Biology from the University of British Columbia. Although Meghan began her Bachelor’s degree focused on marine ecology, she became increasingly interested in marine systems from a social-ecological systems perspective and management of complex systems. This prompted her to enroll in the Master of Marine Management Program at Dalhousie University. Meghan’s master’s research focuses on stakeholder perceptions of the aquaculture regulations in Nova Scotia. Her research aims to understand how different stakeholder groups view the recently implemented aquaculture regulations and how stakeholder’s perceptions of the regulations impact industry development. Stakeholder’s perceptions are an important consideration in decision making, particularly in industries, such as aquaculture in Nova Scotia, that have historically had issues with social licensing. 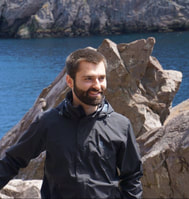 Ryan completed his BSc in Biology with a Concentration in Ecology, Evolution and Animal Behaviour from Carleton University in June 2017. After his undergraduate studies, Ryan continued his education, starting the Masters of Marine Management at Dalhousie University in September 2017. Ryan’s Masters research project is focusing on social perceptions of salmon aquaculture through a specific case study in Newfoundland, Canada. His research is aiming to use social network analysis to describe the common perceptions or coalitions with regards to the Grieg Aquaculture Project in Placentia Bay, Newfoundland. This work will help inform decision-makers on the key players associated with salmon aquaculture in Newfoundland who should be consulted in future salmon aquaculture developments. 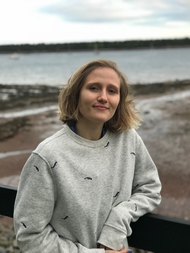 Cécile is currently completing her BSc in Marine Biology and French at Dalhousie University. In her final year, she will conduct an independent research project on bivalve feeding behavior. Cécile’s project will explore the effects of temperature, starvation and pumping rate on particle retention efficiency in the Eastern oyster (Crassostrea virginica). This study will be carried out using a PAMAS field laser particle counter, which determines particle size distribution as the bivalve’s filters water. Cécile’s research will provide data on the inter-individual variability in particle retention efficiency under different conditions and with varying filtering speeds, which could be applied to other bivalve feeding studies. 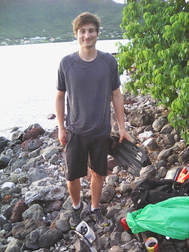 Noah completed his B.A. (Hons.) in Anthropology at the University of Guelph. He then attended Dalhousie University, where he completed his Masters in Marine Management. Noah’s Masters research focused on hard coastal infrastructure and its effects on social-ecological systems. Ashton Lagoon, of Union Island, Saint Vincent and the Grenadines was used as a case study, the site of an incomplete development project (300 berth marina and connecting causeway) abandoned in 1995. Data collected showed that environmental changes associated with the incomplete development project were greater closer to infrastructural emplacements, and that negative societal impacts stemming from alterations in traditional human use patterns were partially mitigated by social adaption to the altered ecological state. This research can be applied to other areas with similar biophysical characteristics planning to introduce hard coastal infrastructure. 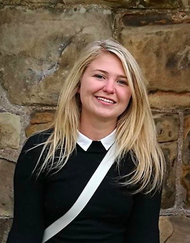 Shellfish mariculture farms are impacted by the effects of climate change, specifically sea level rise and increased sea surface temperatures. This issue is particularly relevant to the Maritime provinces which are concurrently experiencing the expansion of shellfish aquaculture, as well as the impacts of climate change. Laura's project will focus on predicating the future distribution of commercially important shellfish (oysters and mussels) along the Atlantic coast of Canada. This will be done using a Dynamic Energy Budget (DEB) model, which uses sea surface temperature and food availability as a predicting drivers. Additionally, this project will engage stakeholders in the shellfish farming industry, as their perceptions of climate change is an important factor in planning future farm sites. Stakeholders will be interviewed in both Nova Scotia and Prince Edward Island to compare perceptions between two distinct provinces. 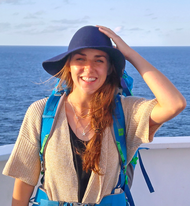 Jessica is currently completing a Master of Marine Management at Dalhousie University. On a broad scale, Jessica’s research interests are related to social-ecological interactions within temperate coastal and marine environments. For her graduate research project, she will be exploring the potential opportunities for community-managed aquaculture to support sustainable rural development, with a specific interest in small-scale mariculture of common commercial species of macroalgae and bivalves. 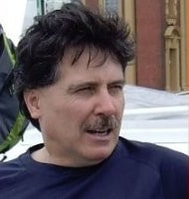 Juan is examining how third party-certifications control the use of antibiotics in global salmon aquaculture. This project will explore the major eco-certification bodies in relation to the major threats that antibiotics can cause to the fish, the ecosystem and the social-ecological systems. 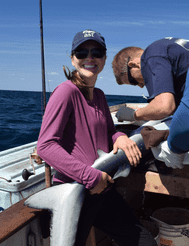 Leah is examining the bioenergetics links between migration timing and habitat use in endangered Atlantic salmon smolts in Middle River, Cape Breton. This project will combine three years of acoustic telemetry data with Dynamic Energy Budget (DEB) modeling. The DEB model will be used to assess the food requirements of Middle River smolts and the food availability in different regions along their migration route. The goal of this study is to identify factors that influence the variability in residency time and migratory patterns of Atlantic salmon when exiting their natal rivers and travelling through the Bras d’Or lakes to the ocean. 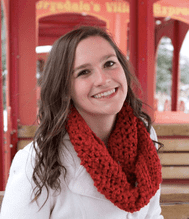 Jordan’s research focussed on the herring fishery in Southwest Nova Scotia/Bay of Fundy region. The purpose of her project was to find ways to improve forage fisheries in Canada by using this fishery as a case study. Forage fish are small-medium sized mid trophic level fish that many other species prey upon. They have huge impacts on their respective ecosystems and as such, their fisheries need to be conducted in a way that is sustainable for the whole ecosystem. By using a PESTE/SWOT analysis of the herring fishery as a case study, Jordan was able to find that more ecosystem approaches to fisheries should be prioritized within the fishery management of forage fish in Canada. 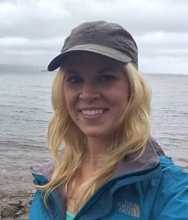